News AAB College honored the Ambassador of the Kingdom of Netherlands in Kosovo, his Excellency Robert Bosch with the award of “Doctor Honoris Causa”

AAB College honored the Ambassador of the Kingdom of Netherlands in Kosovo, his Excellency Robert Bosch with the award of “Doctor Honoris Causa” 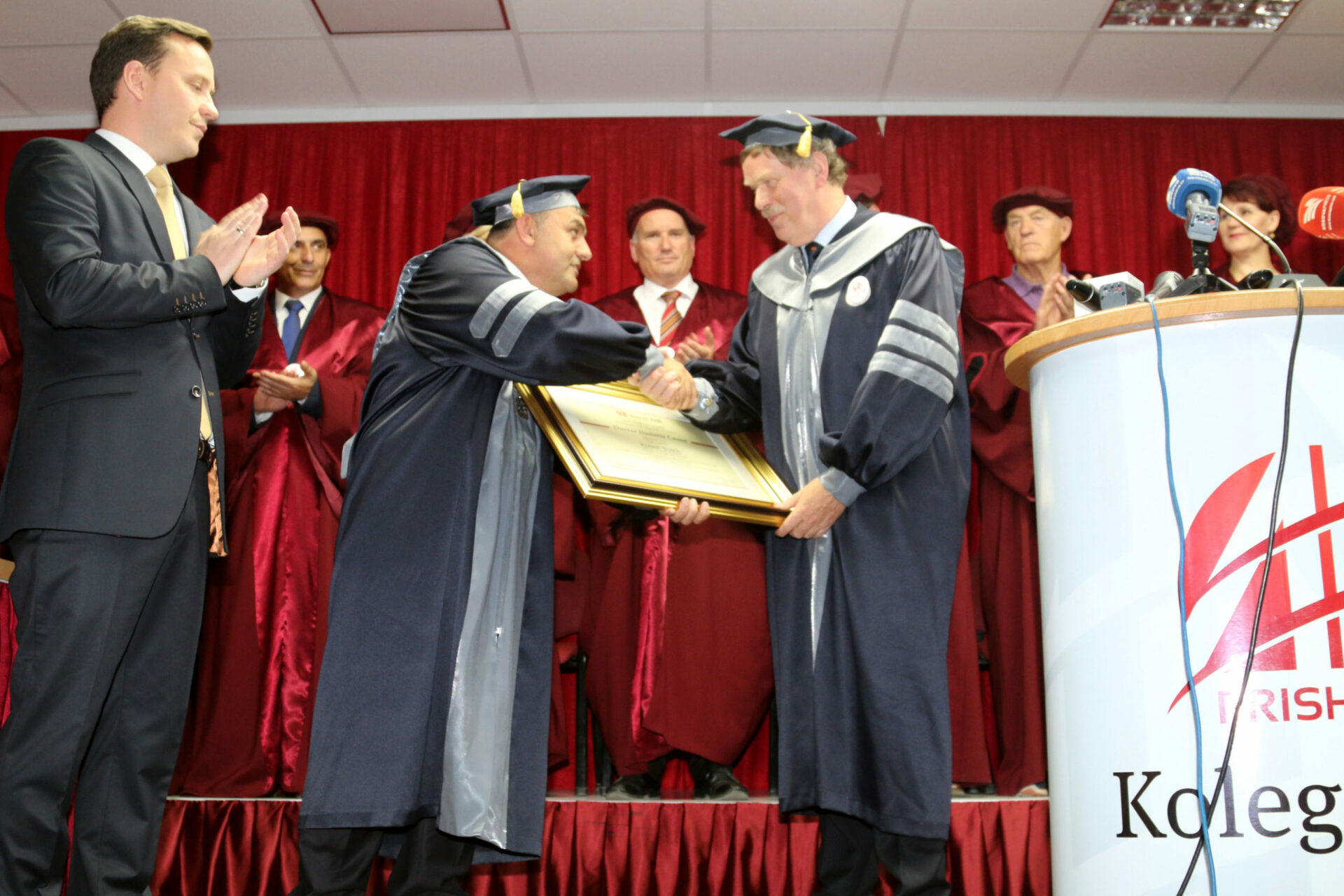 The Ambassador of the Kingdom of Netherlands in Kosovo, his Excellency Robert Bosch, was honored by the AAB College with “Doctor Honoris Causa” title, withthe motivation for extraordinary efforts in promoting proactive diplomacy andunique contribution for democracy in Albania and Kosovo. The former president of Albania Alfred Moisiu, former president Fatmir Sejdiu,former Prime Minister Ramush Haradinaj, deputy prime minister Kujtim Shala, ministers Ferid Agani, Edita Tahiri, Hikmete Bajrami, members of the parliament Flora Brovina, Nenad Rasic, Emilija Rexhepi, EULEX Head of Mission Gabriele Meucci, most of the accredited ambassadors in Kosovo, as well as representatives of civil society and the professors and students participated in the ceremony of decoration.

The rector of AAB College Prof. dr. Lulzim Tafa, stated to dignitaries that he was honoured to award with “Doctor Honoris Causa” title the Dean of the diplomatic corps accredited in our country, Ambassador of the Kingdom of Netherlands, Mr.Robert Bosch, solely awarded by this institution.

“Since the day of the establishment, up until today we have awarded the title of “Doctor Honoris Cauza” to two eminent personalities: President of Croatia Mr. Stjepan  Mesiq for his contribution and tremendous support for the freedom and independence of our country, and to the President of the Republic of Honduras, whereby today, we honour the ambassador Bosh for the intellectual and diplomatic model that he represents”, said rector Tafa. He added that the proposal for decoration of the ambassador Bosch came from the students and professors of the Department of Political Sciences, where almost all ambassadors in our country held lectures.

While professor Venera Llunji in the capacity of decorator, who read the reasoning of the award “Doctor Honoris Causa”, said that as a result of the commitment,dedication and his work in representing the Kingdom of the Netherlands, inoffering support to state institutions of the Republic of Kosovo, on its way ofdevelopment and political, economic and interpersonal advancement, based on thestatute of AAB College, the College Senate has decided that the title “Doctor Honoris Causa” for special merits in proactive diplomacy in the Balkans, to be awarded to.

After receiving the award from the Rector Lulzim Tafa, the Ambassador of the Kingdom of Netherlands in Kosovo his Excellency Robert Bosch expressed hisgratitude, saying that it is an honor that an appreciation for his profession is awarded from such a great college. “The reasoning read by professors is maybe exaggerated because you know that when you read the names of other people you say to yourselves, why me? But actually I’ve done everything possible to promotedemocracy, human rights, especially for minorities and the rule of law as an OSCEambassador. Always behind the scenes, not always successfully, even here as theambassador of Netherlands I have acted in the same manner. I have also suggested to lawmakers their duties by showing them their Euro-Atlantic path“, said Bosch.

Referring to his experience in Albania and Kosova, he said that the school books, not only those of history but all social science books in Kosova and Albania should be advanced in line with the European-western model.

On his speech, the Albassador Bosch expressed his gratitude especially to President Moisiu and Minister Arben Malaj for their effort to attend this ceremony from Tirana.

At closure of his speech, Ambassador Bosch said that this prize is the award for allhis colleagues who have done their best to work for their countries, wishing abetter and brighter future for Kosovo.