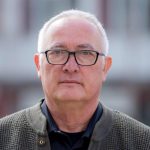 Bujar Demjaha was born in Ferizaj in 1960. He is a distinguished architect in Kosovo but also abroad. He has designed many projects and has published several important books in Kosovo, the region, Germany, United Kingdom, France, etc.

In addition to the special project “Adem Jashari” memorial in Prekaz Bujar Demjaha has also designed several memorials in Prishtina, Klecka, Gllogjan, Kerchovo, etc .. Other important projects of Demjaha are: Municipal Development Plan of Prishtina, Urban Regulatory Plan of the Pejton Neighborhood in Prishtina, Kosovo’s Contemporary Arts Museum (First Price in Competition). His projects from the conservation and restoration area are: Engelhard Complex (XV century) – Blanzac in France, Ethnological Museum “Emin Gjiku” in Pristina. From the field of interior rehabilitation of the Kosovo National Theater and the Kosovo Museum in Pristina are its distinguished projects.

2006 “Adaptation of Public Buildings for Persons with Disabilities”, HandiKOS-Pristina, author

2007 “Technical data for the design of architectural spaces and modules”

2010 “Free environment – society for all”, Council of Europe, author

Bujar Demjaha holds the highest scientific degree Doctor of Science in the field of Architecture, Urbanism and Regional Planning, is a teacher of several subjects at AAB College and Tetovo University

Lives and operates in Prishtina.