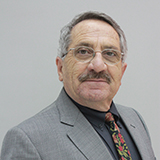 Ekrem Kryeziu was born in 1943, in Peja, Kosovo. He is a film and television director, film author and producer from Kosovo. He graduated at the Academy of Film in Belgrade, the department of Dramaturgy, at the class of Professor Josip Kulundzic. As a student he was engaged at the editorial office of Albanian Language of the Belgrade TV, he worked as a scriptwriter, editor, and as a director. The list of titles of Kryeziu’s works, as an author and director is rather long; so far he has conducted eleven documentary films. He is the founder of the production company of film and music “Labia”. In 1996, he founded the branch of Dramaturgy at the Faculty of Arts of the University of Prishtina, leading it for three years; he worked for several years at this university a professor of dramaturgy. He also deals with journalism and political analysis, and now is ranked as the most productive director of the film production, television and theatre in Kosovo. He lives and works in Prishtina.