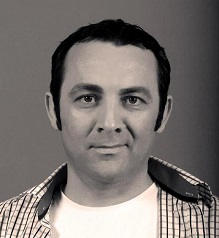 At the beginning of the studies, Ilir Tafa started mastering the actor’s profession and within a short period of time achieved highly praised performance, in theatre and cinema, both at home and abroad. So far, he played in several films and serials, and in many theatrical performances, with a variety of stage roles as: “Sonte jam vetëm”( Tonight I am alone),”Alo 038” (Hello 038), then “Studio 2” (Studio 2) in the featuring films “Atje ku nuk lind dielli”(Where the sun does not rise) “Shtëpia e tmerrit” (House of Horror), serial films “Kamera me yjet” (Camera with the stars) “Kandidati për president” (Presidential Candidate) “Kaçurrelët” (Curls) “Zogjtë e luftës” (War Birds).Since 2009 he participated in many theatrical artistic projects, films and TV as well. In the whole region of former Yugoslavia he became most famous due to serial film “Lud, Zbunjen, Normalan” (Crazy, Confused, Normal).

He was awarded the price of “Best Actor”, at the Film Festival of Kosovo – Gjilan, the Festival of Albanian Comedy in Preshevo, Balkan Theatre Festival in Pristina and the Albanian Theatres Festival held in Debar, Macedonia.

Ilir Tafa holds the highest university degree in the field of acting being at the same time a lecturer of Diction subject. He lives and works in Prishtina.