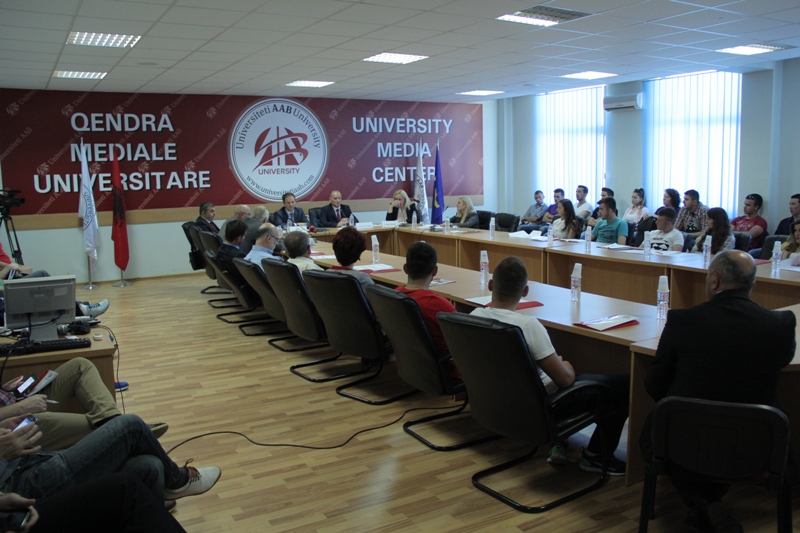 Prof. Dr. Tomasz Kamusellafrom Scotland lectured in front of AAB College students, on the topic “Difficult marriage – diversity and the democracy in Central Europe after 1989”.With regards to the topic he provided many examples related to the nature of changes that occurred in Central Europe over the years seemingly the same may happen in Kosovo aswell.  Therefore, Kosovo citizens should create a more appropriateenvironment for a diverse and non-problematic living, for all entities. According to Professor Kamusella, the marriage between democracy and diversity is the most complicated element in the world of XXI Century, because “everyone knows that democracy is the rule of living. But the democracy cannot be a rule of living in tyranny. This is the concept of diversity, that shall be protected by democracy and protect the rights from tyranny”.

ProfesorKamusella scientifically elaborated the notion diversity, which implies balancinga society, the rights of which are recognized by human rights and minority rights, but he said that they aremostly those people who decide the policy of a state and accept the diversity of other minorities living in that country. He took the example of Finland and Sweden, explaining that the two countries had previously been in war with each other, but now are a good example of the acceptance of diversity between the people of the two countries.

Taking this example, Professor Kamusella said that in future Kosovo could also have the same diversity between Albanians and Serbs living in Kosovo. He also gave examples of many countries that underwent such transformations through different historical periods, facing the same problem, citing the 1990s when the two Germany’s reunited, in 1991 when the Soviet Union dissolved, thecollapse of Communism in Albania in 1991-1992, in 1993 the dissolution of Czekoslovakia and during the years of 1991-2008 the dissolution of Yugoslavia. Prof.Kamusellaalso said that Switzerland is considered homogenous by its inhabitants, for all Swiss nation is consisted of all Swiss citizens, regardless of religious or linguistic differences, as foreigners consider Switzerland as different for being four lingual.