News Scientists of 24 countries were presented in the Conference

Scientists of 24 countries were presented in the Conference 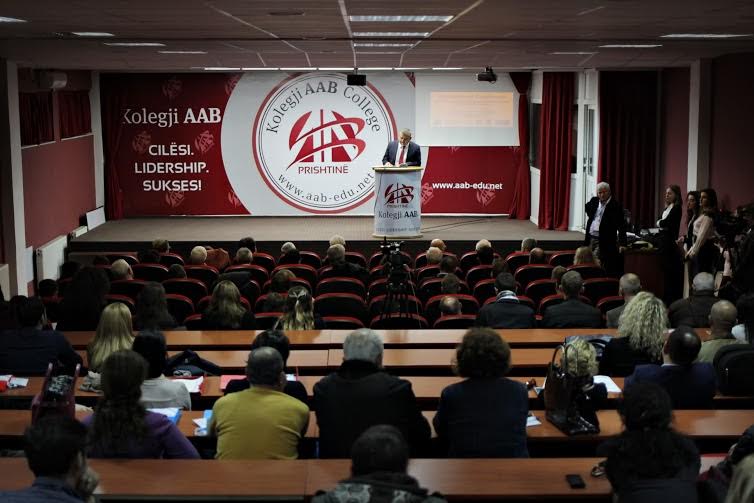 One year ago, the AAB College and the Albanian Institute of Sociology invited scholars from all around the world to participate in the International Conference of Science with the topic  “International migration and its impact on contemporary society”.

The Conference held at the AAB College in Prishtina, was attended by 260 scientists and researchers from 24 countries of the world. This scientific activity was conducted in collaboration with the Albanian Sociology Association (ASA), International Sociology Association (ISA), Balkan Sociological Forum (BSF), Association of Kosovo Sociologists    (AKS), “Aleksander Moisiu” University, Durres (AMUD), European University of Tirana (EUT); “Marin Barleti” University, Tirana (MBU) and with the cooperation of UNICEF- Kosovo.

Conference proceedings lasted two days, and were conducted simultaneously in 15 thematic sessions, addressing issues regarding the propulsive and attractive factors, on negative and positive reasons and of consequences of international migration of places of origin and destination, respectively over the impact of migration towards social, cultural, political, economic, educational institutions and so on, that have impact on dominating the future developments.

During the Conference discussions, among others, it was also mentioned that migration represents the most severe crisis that Europe is facing today. Therefore, these crisis not only affect moral values, that represent the foundation of the EU, but they also reflect on European security and its politics. Illustratively we may mention the wave of refugees that clearly showed the lack of long term vision of these crisis.

It is worth mentioning that the rector of AAB College, Mr. LulzimTafa, at the opening of the conference thanked the participants for their contribution to this topic that today is actual in Europe and in the world. He said that AAB this year organized four high level scientific conferences, in the fields of architecture, media, justice and lately the field of sociology, which is associated with 16 other areas, whereby with regards to organization of these conference, it has collaborated with many prestigious universities and institutions. Moreover, he also specified other great movements from Asian countries involved in senseless conflicts and wars. Unfortunately, at the beginning of this year, our country Kosovo, had to cope with such  difficult situations of massive migration of its own population abroad as well.

Meanwhile, the Minister of Diaspora, Valon Murati, during his speech said that the theme of this conference is a particular topic since the Albanian world has also begun to address such important issues as the immigration, in both academic and scientific areas, said Minister Murati.

On the other hand, the Ambassador of Albania to Kosovo, Mr. Qemajl Minxhozi, said that migration and immigrants have been and yet are one of the key factors of world development nowadays. Issues risen here today may be a guidance for the political class of every country with a decreased democracy development.

At the opening ceremony of the conference, three awards were delivered as well, one for best scholar in the past 10 years, given to the scholar from Albania Mr. Servet Pellumbi, while two other awards for their contribution towards the scientific research were given to Mark Tirtra and Uliks Haku.

Also, during this ceremony an intercollegiate cooperation agreement between the AAB College and the University of Durres “Aleksander Mojsiu”, was signed by the rectors of the respective institutions Mr.Lulzim Tafa and Mr. Mid’hat Mema.

The conference presented a range of research work of young scholars, university teachers and partner institutions of AAB and students of these profiles.